25% of Americans claim German heritage. Many of the immigrants settled along the Ohio River. In Louisville, Kentucky, the number went up from a handful of Germans in the 1820s to 18.000 German immigrants by the 1850s. The German Bus Team put the city on the top of their list of places to find citizens with German roots. Here comes a list of the first 5 steps the immigrants took when they arrived in their new home

1.Do you know what the first thing was immigrants did when they arrived? They started building churches. In Louisville we found 30 Protestant and Catholic churches with German origins. There were stained-glass windows that were either donated by German families or even shipped over from Germany.

2. What else is important when you immigrate to a foreign country? Of course you want to get the newest updates on what is going on in your neighborhood. For that the Germans had their own newspapers, 28 in total in Louisville alone, all written in German. The „Louisville Anzeiger“ (Louisville advertiser), was the longest running of them. It was published for 89 years!

3. Shortly after the end of the pioneer era the German hoteliers became an important part of the town’s growing hospitality industry. After the introduction of the steamboat in 1811, Louisville became an important river port with thousands of travelers passing through. The two most important German hoteliers were Louis and Otto Seelbach, natives of Bavaria, who built the Seelbach Hotel in 1905. It used to be a favorite stopping place of author of the Great Gatsby, F. Scott Fitzgerald, and is today still in use as a boutique hotel.

Jonas at the singing rehearsal

4. As Germans immigrated in the US they formed social organizations as a way of promoting and sustaining the culture of the home country. Most of these clubs centered around either music or athletics. We visited the German-American Club Gesangsverein (singing society) when we, the German Bus, arrived in Louisville. In 2018,  the 400 members will celebrate the 140th anniversary of the club. German Bus Team member Jonas even took part in the rehearsals.

5. Another important part of sustaining culture but also the social life then and now of German-Americans is participating in a Stammtisch. In Louisville the Germany-lovers created the Stammtisch Mainz, named after Louisville’s sister city in Germany. When the German Bus Team arrived, the members welcomed us warmly and we spent a great evening as they shared with us their stories of travels to Germany, also showcasing their German skills.

Watch the video of the German Bus Team visiting Louisville and searching for German heritage:

immigration, Kentucky, Louisville
Berlin Energy Transition Dialogue 2018
What do you know about Germany? 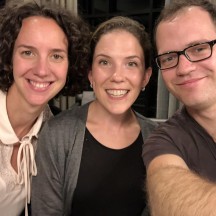